School of Philosophy
University of Ioannina 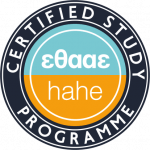 The Department of Philology was established in 1984, but its history goes as far back as 1964 when the Faculty (: ‘School’) of Philosophy admitted students for the first time. The commencement of this undergraduate program also marked the beginning of the University of Ioannina altogether, initially (1964-70) as an annex of the University of Thessaloniki. In 1984, the Faculty (: ‘School’) of Philosophy was split into three independent Departments, namely the Departments of Philology, History & Archaeology, and Philosophy, Education & Psychology (currently, Department of Philosophy).

The Department of Philology is divided into three Sub-faculties (‘Divisions’), namely Classics, Byzantine & Modern Greek literature, and Linguistics, which offer a joint undergraduate (BA) program in Philology. The undergraduate program is uniform for the first three years of studies but is distinguished into three different pathways / specializations (Classics, Medieval & Modern Greek literature, and Linguistics) in the fourth year.

The main aim of the Department of Philology is to provide its undergraduate and graduate students with first-class education, while promoting at the same time scholarly research in the fields of Classics, Medieval and Modern Greek literature, and Linguistics.